Over the last three decades, the main pressures suffered by continental freshwater systems
have arisen from the introduction of allochthonous species. Welcomme (1988) reported
1,354 introductions of non-native species of all possible kinds in the 140 countries
investigated. In the case of fish, the establishment of novel species in continental aquatic
ecosystems represents a threat to global biodiversity.
The drastic reduction of biodiversity and changes in structure of fish communities in the
great lakes of Africa that have resulted from the introduction of non-native fish species are
already described as one of the greatest ecological disasters of the twentieth century in
freshwater ecosystems (Miller 1989).
In South and Central America, regions known for some of the most diverse fish communities
on the planet, the non-native introduced species have reached 25.3% of the
number of native species. The majority of these introductions were carried out with the aim
of boosting the fishing stock, as an alternative to fish-farming (Welcomme 1988).
The most obvious impact of a successful program of introduction of non-native fish
species is known to be the depletion of stocks of native species (Zaret and Paine 1973;
Fernando 1991), including local extinctions. This results in qualitative and quantitative
restructuring of the fish community, due to altered habitat availability, increase pressure of
competition for food resources and reproductive sites, stronger predatory pressures,
occurrence of dimorfism and genetic degradation in native species (Agostinho et al. 1994)
and hybridization of phylogenetically related local and introduced fish, which can cause
changes in the gene pool.
Such changes in the structure of the fish fauna in aquatic ecosystems often have negative
consequences for the local or regional economy (Zaret and Paine 1973; Rocha et al.
2005), in some cases leading to alterations in the traditional activities of riverside communities
and in local social production (Agostinho et al. 1994; Petrere et al. 2002). In the
Brazilian southeast, an example of this process was found in reservoirs of middle and lower
Tieteˆ River reservoirs (Sa˜o Paulo State), pertaining of the Parana´ River Basin—Parana´
Hydrographic Region (Fig. 1). Allochthonous fish species were introduced into reservoirs
systematically from the 1960s, engendering a reduction in the diversity of fish species
along the whole course of the river and even local extinctions of certain native species.
The first introduction record of a non-native species concerns the Amazonian fish
Astronotus ocellatus, which arrived in 1938 (Mendes-Sobrinho 1969). Next, the African
species Tilapia rendalli and Oreochromis niloticus were introduced, in 1952, to augment
the fishing stocks, according to Welcomme (1988), followed by Plagioscion squamosissimus
in 1967, a native species of the River Paranaı´ba, Trombetas, Negro and Amazonas
(Nomura 1984). The 1980s saw the consolidation of introduced populations of other
species, including Cichla ocellaris, Triporteus signatus, Lipossarcus anisitsi, Satanoperca
jurupari, Trachelyopterus coriaceus, Hoplias lacerdae e Colossoma macropomum (Smith
et al. 2005) 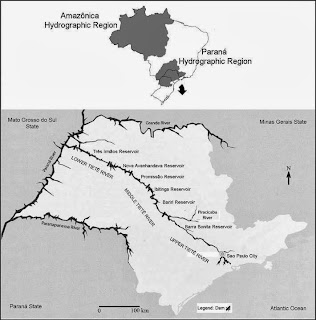 Fig. 1 Localization of reservoirs in themiddle and lower Tieteˆ River basin, Sa˜o Paulo State, southeast of Brazil
(lower). Localization of Amazoˆnica hydrographic region and Parana´ hydrographic region in Brazil (upper)
Among the several non-local species introduced into the reservoir of Upper Parana´
River Basin, P. squamosissimus, a voracious species known commonly as corvine, was one
of the few well-suited to the existing conditions, so that it soon reached very high densities
in the Itaipu reservoir, Parana´ River, becoming the third most heavily fished species
(Agostinho et al. 1995).
The species Geophagus proximus Castelnau 1855, generally known as caratinga
(Cerdeira et al. 2000; Sampaio da Silva et al. 2005), has its origin in the Amazon Basin—
Amazoˆnica Hydrographic Region, North of Brazil (Fig. 1), and had been recently catch by
the fishers in the reservoirs of lower Tieteˆ River. This scenario calls for an immediate
efforts to confirm the occurrence, to verifying the actual introduction status (population
structure analysis) and analyzing the potential impacts on the local fish fauna. In this study,
the potential or probably impact is analyzed by the modifications in the competition
pressure of food resources caused by the new species occurrence. The major of fish species
has a large diet spectrum and the food competition can be analyzed by the knowledge of
feeding species habitats in the same ecosystem (Lowe Mc-Connell 1987).
The data collected on various features of the population of G. proximus, in the three
sections of a given reservoir, were treated as referring to three portions of the same sample
of the same population.
The species G. proximus was found only in the Ibitinga, Nova Avanhandava and Treˆs
Irma˜os reservoirs. In these reservoirs, 167 individuals of this species were caught, of which
136 were taken from Treˆs Irma˜os, four from Nova Avanhandava and six from Ibitinga,
while a further 21 individuals were previously taken from Treˆs Irma˜os reservoir in May
2003. The abundances of the G. proximus populations are shown in Fig. 2, just for the
reservoirs in which the specie was found.
Excluding the six fish sampled in Ibitinga reservoir, of which body measurements could
not be made because the preservations problems, the total sampled biomass of G. proximus
was 11.14 kg. The fishes collected in Treˆs Irma˜os reservoir represent most of this total,
8.65 kg being the mass of fishes caught in January 2004, and 2.05 kg that of fish caught in
May 2003, while a mere 0.44 kg of fish was collected in Nova Avanhandava in January
2004, as can be seen in Fig. 3.
From the results shown in the Fig. 4, in the whole sample of G. proximus, the ratio of
males (27.63%) to females (26.32%) was close to 1:1, while the proportion of specimens
whose sex could not be determined was 46.05%.
Impact Assessment, with the NEPA, appeared in the United States, this article brings us a little of what is done in Brazil.
Received: 19 October 2007 / Accepted: 23 June 2008 / Published online: 11 July 2008
Springer Science+Business Media B.V. 2008
More texts related to the topic will be present on the site, conexaoterra.
groet omgewing Greeting Environmentalist Milton Santos.